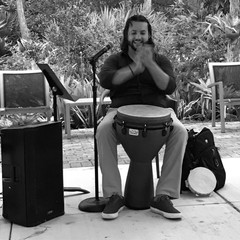 ISSAC Fernández Hernández is a professional, highly educated orchestral percussionist who
Found personal joy during the pandemic by bringing the joy of rhythm and drumming to the
elderly in His community.

REMO is proud to officially endorse Isaac as part of our  "Rhythm Wellness and YOU!" initiative. We not only recognize him as a talented classically trained musician, we support him on finding a way, during the pandemic to do community outreach which led him to also discover the joy of drumming through a recreational, health, and wellness platform.   To discover the power of interactive drumming all on his own witnessing first hand the sense of pride and joy it gave the participants at the retirement facilities; as well as unexpectedly discover the joy it brought him; was life changing for all involved.

Isaac Fernández Hernández was appointed as section percussionist of the Southwest Florida Symphony in October 2014. He has an extensive

freelancing career and per-forms regularly with professional orchestras in the state of Florida, such as the Naples Philharmonic, Jacksonville

Atkatz at Lynn Conservatory, he obtained his Performance Diploma. Isaac received his Master of Music degree from Boston University under the

supervision of timpanist Tim Genis and completed his undergraduate studies at Oberlin Conservatory of Music. Isaac is also an alumnus from the

Interlochen Arts Academy where he originated his percussion studies after moving away from his home country, Costa Rica, at the age of 16. In the

past years, he has performed under various renowned conductors, such as Lorin Maazel, Valery Gergiev, Krystof Penderecki, Donald Runnicles and

Giancarlo Guerrero. He has attended major festivals all over the world ranging from the Pacific Music Festival in Japan (2 consecutive years) to

Lyrique-en-Mer in France and the Penderecki Musik Akademie in Germany and Poland. Isaac has shared the stage with the best musicians in the

world—particularly from the Chicago Symphony, Berlin Philhamornic and Vienna Philharmonic. In September 2015, Isaac made his Carnegie Hall

debut as principal timpanist of the International Youth Philharmonic Orchestra. Isaac is now part of the Zildjian Avedis family as a sponsored