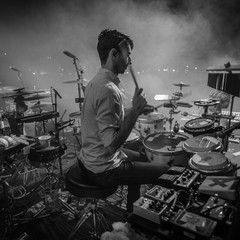 Seattle drummer and percussionist Davey Brozowski has enjoyed an extensive career as a musician, drum technician and now serves as the "drummcusionist" for Grammy-nominated American rock band Modest Mouse. Born in Seattle, Brozowski began playing the drums when he was 13 and studied under a variety of local instructors, including Micheal Derosier of Heart. He was also a founding member of garage punk band The Catheters at 16. Drawing on the raw energy of groups like the Stooges and the Misfits, the group released two albums for Sub-Pop and toured with acts like The White Stripes, Motorhead, Pere Ubu and Mudhoney.

Incorporating his love of visceral acts like The Stooges and the Misfits along with his appreciation for the Beach Boys, particularly the experimental and dynamically-diverse percussion found on Pet Sounds, Brozowski developed a style that combined the raw energy of punk with the clever rhythmic ingenuity of '60s pop.

After the Catheters disbanded in 2004, Brozowski founded the psych-pop band Black Whales, with whom he released an EP and a full-length record, which allowed him to explore more avant-garde pop and kraut-influenced styles. During this period, Brozowski also served as the drum technician for The Shins, toured as a percussionist for Broken Belles and served as a studio drummer for indie rock bands from across the Pacific Northwest. Brozowski began touring with Modest Mouse as the band's drum technician.

When the group's second drummer departed in 2011, Brozowski filled in for him at a New Zealand date and was soon offered a permanent role in the band. Since that first gig, Brozowski has continued to discover and define his role in the band. While manning a sit-down style cocktail kit surrounded with bells, blocks and electronics alongside founding member Jeremiah Green, Brozowski provides subtle textures and improvisational flourishes to the group's beautiful, poetic songs on any given night. But at the same time, with his formative years of bashing away in punk bands, he can also deliver a jolt of energy when the moment calls for it.