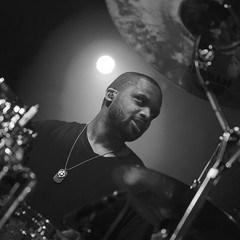 Brook Alexander has been playing drums since the tender age of two years old. Born and raised in Inglewood, California, he got his start playing drums at his grandfather’s church in Los Angeles. Being inspired by drummers such as Brian Frasier Moore, Calvin Rodgers, Aaron Spears, and David Garibaldi, Brook decided to fully pursue a career in music at the age 14. He joined his Torrance High School and Vanguard University music programs, where he studied jazz and orchestration, and gained experience playing timpani, marimba and xylophone. It was through these programs that Brook credits his appreciation for music of all genres, as well as his desire to be authentic and intentional with any style that’s required. Since 2009, Brook has thrived in the music industry as an accomplished touring and studio musician. Some of his credits include working and touring with artists such as Adam Lambert, Demi Lovato, Miguel, Kenny Lattimore, Bea Miller, The Season 14 American Idol Live Tour, Stanaj, and “Glee” TV star Lea Michele. Brook is currently playing drums for Republic Records artist Julia Michaels, continuing to mature in every area of his craft, and furthering his knowledge of music daily. Brook proudly endorses Remo Drumheads and Vic Firth Drumsticks.

-“Remo has been a staple for me throughout my drumming career. From playing for fun as a child, to playing in arenas and venues around the world today, Remo has been and will always be my choice of drumhead…”